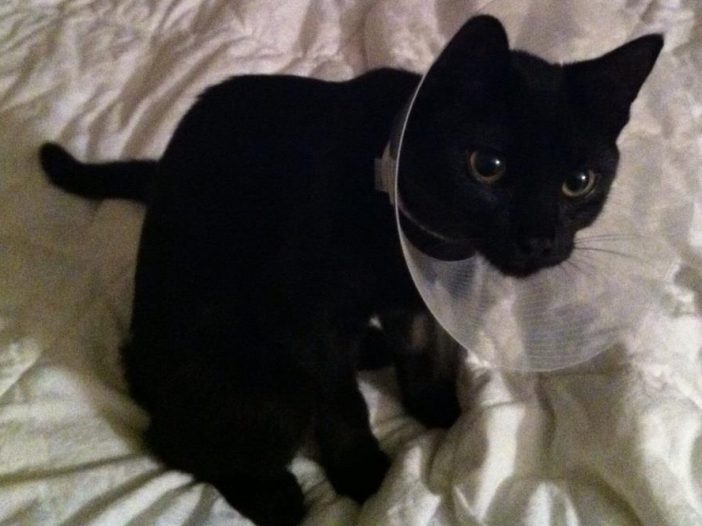 I’m sure most everyone are familiar with the plastic “cone of shame” provided to our pets post-surgery, to keep them from licking and picking at their sutures.

On one trip to the vet to have our young kitten “Topaz” spayed, we also received the cone. But, it was suggested that we could try an infant onesie instead of the cone to keep her from pulling at her sutures.

This sounded brilliant to me. People dress their pets up in human clothes all time, right? What could go wrong?

After her surgery, I dropped Topaz off at home with my husband Tom, and I went off to find the onesie for her tiny body. I found a cute little pink and blue one with ruffles on the rear and I thought it would be perfect!

When I got home, Topaz was nowhere to be found.  Upon questioning, Tom told me he had difficulty putting the cone on her, and that, “she didn’t like it, and she was running into things” ….so he took it off.

Where is she?  “I think she is under the sofa-bed downstairs.”  Grrr!  I went downstairs and pulled apart the sofa bed and alas, there she was in the back corner biting at her sutures and had already managed to get one pulled out.

With the perfect solution in hand, I took her to the upstairs bathroom to fit her with the onesie! Now I’m sitting on the bathroom floor, struggling to put the onesie on her, and it was more “like putting shoes on an Octopus!” She was struggling and flaying about, but, to compound the whole scene, was my husband Tom, remember Tom? He was standing over my shoulder whining at me. “You’re hurting her, she doesn’t like it, she’s scared.”

I’m hurting her? I’m the one getting scratched up here…..

After what felt like an eternity, and my chest and arms all scratched up,  I finally get it the onesie on Topaz.

I let go of her and she proceeded to shake her legs and wiggling around trying to get this thing off of her.

Now Tom is way more upset than the cat. He’s whining again saying, “it’s too tight, she can’t move, she doesn’t like it! Good gravy man, get a grip!!

I was laughing, it was actually pretty cute on her. But to appease my husband and the cat, I begin to remove the onesie.

Now if you thought putting it on her was rough, taking it off of her was just as bad. After struggling with the octopus again with my husband still standing over me still whining, I finally get the onesie off and put the cone back on her, (with no trouble at all I might add.)

I had a class that evening, so I had to leave again. When I came back, guess what? No cat. It was the same thing, with Tom whining that she didn’t like it, and it was too tight and she got her leg caught in it and it was hurting her.

Now they both are in trouble!!  I hollered at him and he stormed off stewing.

Back down I go to the lower level to retrieve Topaz from behind the sofa.  This time, I brought her up to the bedroom, put the cone back on her and shut the door.

We were both exhausted, and she fell asleep on my feet.

That night, Topaz and I slept in the bedroom, and Tom, remember Tom? He slept on the sofa-bed.

Thankfully we all survived the onesie, but in hind-sight, the onesie was not a bad idea. I do think it would have worked fine if Tom hadn’t added stress to the situation.

In fact, recently, when our 95lbs dog Duchess had major surgery, we fitted her with some of Tom’s old T-Shirts, and it was absolutely a blessing.  I would totally recommend either the onsie or Tee, if the occasion ever arises in your life. 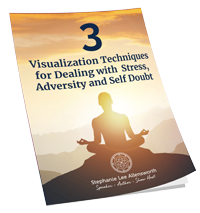